Ma'aal, a fairlytale and a myth that past thru' hundreds of years on Arkacia, but was that really true?...

-For several centuries ago there was a dragon, called Ma'al, Ma'al was the oldest dragon of them all and possibly even the first one, he was on Arkacia years before life even started.
-In time races and other people arrived to arkacia, and mighty kingdoms started to dot the land, with kingdoms expanding they became more noticeable on the world, one rainy and stormy night Ma'al was out, flying which he usully do he saw something glimering in the night by the lightning, - a group of knights, they shiney and well polished armour attracted him so much that he dived into them, the knights got afraid and had no clue what it was, they claimed it was a foul beast as his was bigger than all the horses together, the knights attacked him and Ma'al got angry, he burnt em to crisps, - sadly this ruined the armour Nidhogg was attracted to and he wanted more.

-He developed a attraction for shiney stuff, he wanted more.

-Years passed and the mages around Arkacia have decided to call the foul beast for a ''Dragon'', they were aware of his intrest of shiney stuff, people started to look for the dragon they named Ma'al - the malicious one, to tame him as he would be a weapon of mass destruction, both kings and normal town people tryed to find him, some succedd, some died in the snow or was killed by bandit or beasts.

-Them that found him gave him gift, and in time Ma'al learn what wealth was, and he learnt that wealth was even better sometimes then things that just glimerd in the right light.
-Few people got approved by Ma'al, them that was started to live with the dragon in his cave on a mountain far up in the north, they started a cult called ''Followers of Ma'al'', it didn't prevent him to eat them tho'.

- Several hundreds of years later there was a massive earthquake, that shaped the world as we know it today, Ma'al was a sleep and got draged into the ground deeper and deeper, while he still being asleep, the cult was gone, and them that knew of the great Ma'al was dead, and the knowledge of him was lost, the small stories that managed to survive became myth and fairlytales parents told their children before bed.

-...Until one day the Region of Valyn had visit of the great dragon, Ma'al. -  had crawled his way up for hundreds of years until reaching the daylight, only to start again...

-Apprently now there was more races then before, and the kingdoms have been reborn in new places.

*As dragons have a rather high ego he loves when being gifted stuff, and they'll be allowed to join him if he is pleased
- or they cant take a chance to ask for a favor.

He is a living RP-event. 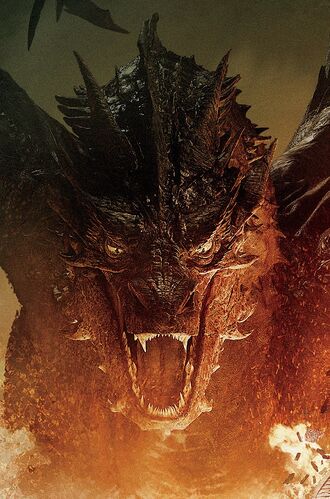